Our Schools Are Not Failing; Our Policy Makers Are – On Raleigh’s New Way of Measuring Schools

When you are the North Carolina General Assembly and you want to stop a string of court decisions that have declared your unconstitutional acts “unconstitutional,” then you change the judicial system in your favor. Or at least try.

When you are the North Carolina General Assembly and you want to remain in power on West Jones Street even when a majority of the political landscape does not favor your policies, then you create gerrymandered districts and discriminatory Voter ID laws.

And when you are the North Carolina General Assembly that is trying to privatize the public school system, you undertake a series of actions that weaken public schools such as school performance grades aligned with achievement, intentionally not fully fund schools, create class size caps with no funding of new classrooms, and throw millions of dollars into vouchers.

You try and disenchant the teaching profession by removing due-process rights and graduate degree pay from new teachers to a point where state education programs have experienced a significant drop in candidates.

And yet public schools are still doing the job.

You simply change the playing field – all to create the illusion that public schools are failing.

For the last three years, schools in our state have been measured with school performance grades, a system adopted from Florida developed by the Jeb Bush administration with the intent on creating a false situation that public schools are failing.

For high schools the following was used to define a school’s achievement score this past year:

High schools will use the following indicators to calculate the achievement score:

Of course, it does not consider the socio-economics that students live in, but the scores certainly reflect it.

So, to guarantee that this school year’s scores will not be as good as last year’s, the North Carolina General Assembly is changing the rules, or rather the indicators. Since science departments have been doing so well with preparing students for the Biology EOC, that indicator will no longer be used.

That’s right. A state that is pushing STEM education to a point that “specials” are being threatened, the Biology EOC is not considered a “good” indication of school achievement.

Why drop Biology from the indicator list? Because that’s the one we as a state do best on. Simply check out the NC School Report Card Site. Look at your own district and it will be compared to the state averages. My school system from 2015-2016 is below. 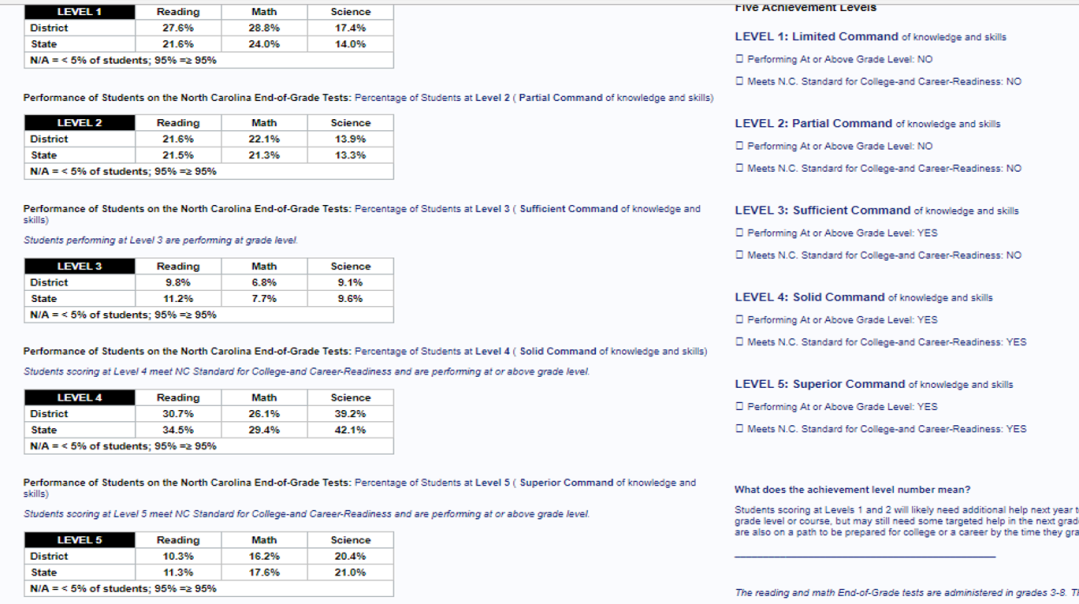 To be proficient, a student must reach Level 3 at a minimum. Look at the state figures.

They are taking out the highest score and then using the rest.

Try telling a student that you will not be using the highest test grade in teh final average. Well, that’s what the state is doing.

It’s almost as if the NCGA saw that schools were doing too well and being too successful that it necessitated some sort of action to counteract that “growth” to help substantiate the need for all of the unregulated reforms.

With the removal of the BIOLOGY EOC indicator, school achievement scores will go down; therefore, school report cards will go down as well as school performance grades.

Add to that, the increased reliance on ACT scores. As relayed in an earlier post:

But now in the coming year, the ACT is about to become the most “important test” that will be given in all of North Carolina high schools. That is thanks to CCRGAP, or the Career and College Ready Graduate Alignment Partnership.

It cannot be helped that taking out a “C” and the “G” from the acronym gives us “CRAP” was not noticed.

What this is saying is that if any high school junior does not make a certain score on the ACT (or its particular subject areas), then they must go through remediation during their senior year using a curriculum chosen/designed by a local community college but delivered by the high school teachers within already prescribed core courses.

In short, teachers would have to take time in their already crowded and time-constrained classes to deliver more curriculum.  No extra time will be given. Curriculum standards for the actual classes still have to be met. Why? Because there will be a test for them.

Debate over what scores will be the threshold for whether a student must be remediated maybe just starting. What was reported to this teacher in a professional development workshop was the following:

However, that last sentence needs to be changed, because what was communicated recently was that it was not an “OR” situation, but an “AND” situation. To repeat, students would have to make a certain threshold score on the ACT portions of the test AND have a certain GPA. As of this post, it was a 2.7.

Let’s add to that. School report cards will now not only have one grade. It will have a multitude of them: a grade for each student population break down. It would take a textbook to show how that alone would allow the NCGA and DPI to use cursory grades to confuse the public about the effectiveness of a school. Imagine if there are 10 students identified within a certain “subset.” One student did not show up for the test and two students do not meet proficiency even though the students are identified by an IEP which highlights particular learning disabilities that are exacerbated by standardized tests. Seven out of ten of those students passed, but the report card for the school may reflect a letter grade lower than a “B” for that “subset.”

The state seems unwilling to explain why the sudden change in how schools are now measured, so the state probably will not go out of its way to explain fully what each subset report card score actually communicates.

Actually, the state is being willingly unwilling to explain.

Is it not also interesting that the new principal pay system is now linked to school performance? These new parameters to ensure lower school achievement scores will translate into lower school performance scores, hence a more “controlled” way of paying principals. If BESTNC, who brokered this new flawed principal pay system, did not know about this change in how schools are to be graded, then every school in North Carolina will be receiving a “B” or higher.

But we know better.

In a day when our General Assembly wants to use performance incentives and merit-based pay scales, it is rather obvious that they will also redefine what performance is and what merits actually receive the most “reward.”

So, what has our State School Superintendent said about all of this?

At least his “performance score” will not get any lower.

But teachers will continue to do the very job of educating students DESPITE what lawmakers do. They understand that the constant change in measuring public schools does not reflect that schools are failing.

It reflects that lawmakers are failing.

Education for a Stronger North Carolina

When a North Carolina Lawmaker Says, “Well, We Are Spending More on Education Than Ever Before,” Then Consider This

Trump: The Great Motivator for Women in Politics?

This site uses Akismet to reduce spam. Learn how your comment data is processed.

Join our mailing list to receive the latest updates, news, tool kits, and action items from our team.

Thank you for Subscribing!